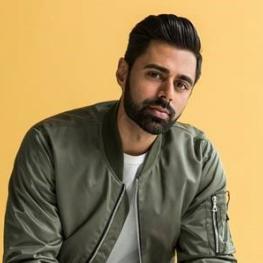 Due to unforeseen circumstances, the new date for the Hasan Minhaj concert scheduled for November 11, is April 1, 2023, and will coincide with the WSU Spring Family Weekend.

Tickets for the April 1 show can be purchased through TicketsWest.  Ticketholders for the November 11 show should keep those and they will be honored and their seat guaranteed for the new date. 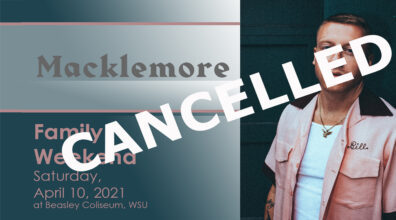 Due to the many COVID‑19 restrictions continuing in the state of Washington, Beasley Coliseum and Washington State University feel it is best for all concerned to cancel the Macklemore concert currently scheduled for April 10, 2021. This concert was originally scheduled for the Family Weekend on April 4, 2020, it was postponed to October 9, 2020 and postponed again to April 10, 2021, all because of the uncertainty of the coronavirus.

Tickets will be refunded beginning January 4, 2021.

We apologize for the disappointment and inconvenience this has caused and appreciate your patience through these unprecedented times. If you have additional questions, please contact TicketsWest at https://www.ticketswest.com/customer-service. 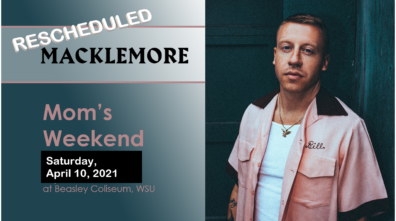 Thanks again for being patient with Beasley Coliseum and Washington State University as we deal with the uncertainty day to day with the COVID-19 virus.  Because of the continued restrictions in the state of Washington we find it necessary to look at the October 9, 2020 concert with Macklemore (postponed from April 4, 2020).  Macklemore and Beasley Coliseum have agreed to again postpone the concert to Mom’s and Family Weekend on Saturday, April  10, 2021.  We know how important this concert is to the Washington State University community so we want to honor the tickets that are already sold and refund ticket holders who are unable to attend the concert in April 2021.

If you are unable to attend the new date, you may request a refund by completing a Refund Request Form at this link https://paciolan.wufoo.com/forms/q7vs0gm0wopdc0/

Refunds will be available until October 9, 2020 at midnight.

If you purchased tickets through a third party you will need to contact them for a refund.

Any remaining tickets will go on sale on a TBD date in January 2021. 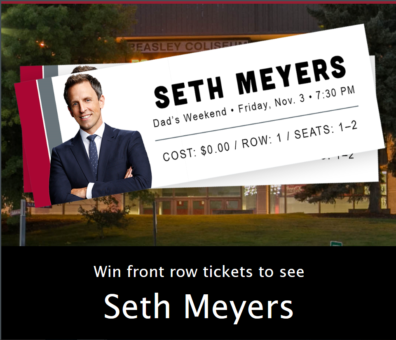 We’re giving away two tickets to the Dad’s Weekend performance on November 3. The winner will be randomly chosen from all of our followers on Facebook and Twitter.

The two front row seats will be for the Seth Meyers performance at Beasley Coliseum on Friday, November 3, 2017, at 7:30 p.m. The event is a part of the WSU Dad’s Weekend in Pullman, Washington.

A winner will be chosen on Monday, October 16 at noon. We will contact the winner by private message on their social media account. The winner has 48 hours to respond. If there is no response within 48 hours, we’ll randomly choose a second winner.

The winner will need to give two names to reserve the tickets at will call the night of the performance. Value of prize is $120. Prize tickets not for resale.

Good luck, and thanks for connecting with Beasley!

On sale Monday, August 29, at 10:00 a.m. at the Beasley Coliseum box office or TicketsWest outlets

Trevor Noah is the most successful comedian in Africa. He is the host of the Emmy and Peabody Award-winning program The Daily Show on Comedy Central. Noah joined The Daily Show in 2014 as a contributor.

Born in South Africa to a black South African mother and a white European father, Noah has hosted numerous television shows including South Africa’s music, television and film awards, the South African Comedy Festival and two seasons of his own late night talk show, Tonight with Trevor Noah. He made his U.S. television debut in 2012 on The Tonight Show with Jay Leno and has also appeared on The Late Show with David Letterman, becoming the first South African stand-up comedian to appear on either late night show.

Noah recently debuted his one-hour stand-up special, Trevor Noah: Lost in Translation, on Comedy Central. Filmed at The Lincoln Theatre in Washington, D.C., Trevor Noah: Lost in Translation brings Noah’s unique world-view and global analysis of American culture to the forefront. In the special, Noah addresses major domestic and international events of the past year, sharing his outlook on the world today, including terrorism, racial tensions in America and what it was like being African and travelling into the United States during the Ebola crisis.

Noah’s one-man show The Racist at the 2012 Edinburgh Fringe was a sold out run that became one of the most talked about shows at the Festival that year. That same year, Noah was the subject of David Paul Meyer’s award-winning documentary film You Laugh But It’s True which tells the story of his remarkable career in post-apartheid South Africa. His Showtime comedy special, Trevor Noah: African American premiered in 2013. Recently, Noah performed for the Royal Family at the Royal Variety Performance. He was nominated for “Personality of the Year” at the 2014 and 2015 MTV Africa Music Awards and won the award in 2015.

He continues to tour all over the world and has performed in front of sold out crowds at the Hammersmith Apollo in London and the Sydney Opera House in Australia as well as many U.S. cities.  He is currently the host on The Daily Show on Comedy Central.